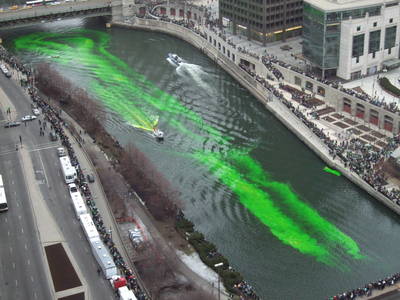 Chicago, 1962 is where it all began, according to mentalfloss.com. The build up of sewage along the riverfront was outrageous, and it seemed someone was polluting the river. Mayor, Richard J. Daley authorized the pouring of a special green dye into the river, allowing him to see where exactly this dumping of toxic waste was coming from. In order to get to the bottom of the city’s pollution, Chairman of the Chicago Journeymen Plumbers Local, Stephen Bailey, provided the city with a solution: a green dye that would pinpoint exactly where the river waste was coming from. It was later, when Bailey saw a colleague with green-soaked overalls, that Bailey was struck with a sudden idea: If they could streak the Chicago River green, why not turn it all green on Saint Patrick’s Day?

Ironically enough, Bailey was also the chairman of the Saint Patrick’s Day Parade.

Years after Chicago started using the green dye in the river, a new problem arose, says the Chicago Tribune. The dye was created with an oil-based fluorescein, which turned out to be damaging the river. So, in 1966 environmentalists created a powdered vegetable-based dye. The dye starts out as an orange powder, but turns green when mixed with water.

Chicago continues this tradition every year, placing the powder in the river before the St. Patty’s Day Parade.

Six lucky members of the local Plumbers Union plop aboard two boats. The first big boat uses flour sifters to spread the dye into the water, and the smaller boat follows behind in order to help mix the substance. It is estimated that roughly 100 pounds of powder went into the Chicago River for the 2015 St. Patty’s Day Celebration.