Home / Community News / Feature / Coach of the Week and of the Year? 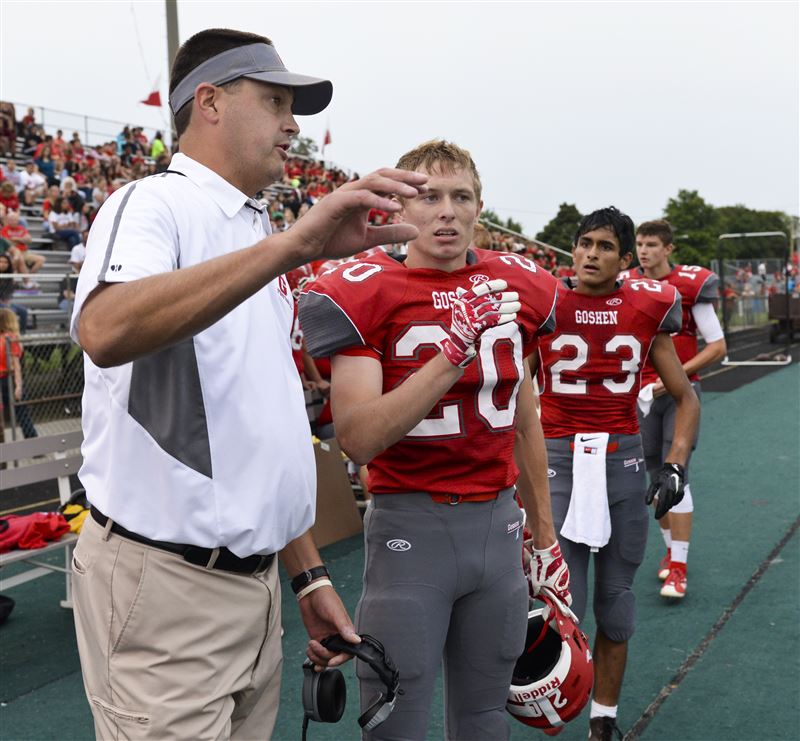 Head coach Kyle Park is honored with a Colts recognition after helping the Redskins to a 4-0 season the week of September 14.

Park received a phone call early morning on Saturday, September 12 from Paul Condry to congratulate the Goshen head coach on being recognized as the Colt’s Coach of the Week. Paul Condry is best known as the president and founder of the Regional Radio Sports Network, a well known sports radio that covers high school and college sports in Indiana. Condry is also the coordinator of the NFL/Colts Coach of the Week Awards Program according to rrsn.com.

For Park, the recognition came after 18 months of hard work and determination to strike a win for the Redskins. Though the coach affirms that the award should not be called the Coach of the Week Award, but rather the “Team of the Week Award,” due to the hard work that everyone on the team dedicates.

The award itself entitles Park to be officially recognized at a Colts practice in Indianapolis this December. Later that month, December 20, he gets the chance to watch a Colts home football game against Houston, where he will be recognized alongside all the other coaches who receive the award this year. Another part to the award is $2000. Park plans to use a large portion of the money prize to, “jazz up Foreman field,” after a new mascot is chosen.

A lot has been accomplished by the head coach in a mere two years of revitalizing Goshen football. Park was hired in November of 2013 during a school board meeting. His excitement was evident despite the great change that was to come.

Park lived in Zionsville, a city near Indianapolis, where he taught and coached Zionsville High School’s football team as an assistant coach. According to the coach, he and his family lived comfortably in Zionsville, but when the opportunity of being the Redskins’ head coach arose he he could not miss it.

After being hired that November night, Park started the transition process of meeting the players and football staff of Goshen High School. He noticed the players’ excitement and readiness for change, in fact, the entire community was ready to see the Goshen Redskins achieve their first victory after a record 10-0 season. Despite the enthusiasm and desire to improve, Park had lots to do. The new coach began to reshape the demoralized team. In rebuilding a the new team, he told them many times, “We can’t go back and change history, what we can do is learn from it.” It took another losing season in 2014 to truly know the dynamic of the Redskin football team.

Being a state champion himself, he remembers what it was to be a respected Redskin on the field. That is what he wants to bring back to the Goshen community, something that his father, Brad Park, had well established between 1993 and 2002. The head coach’s father had managed an amazing 81-34 record during his time as a coach in GHS. The current Park is doing well in rebuilding the Redskins’ respect back on the on field, currently having an 4-1.