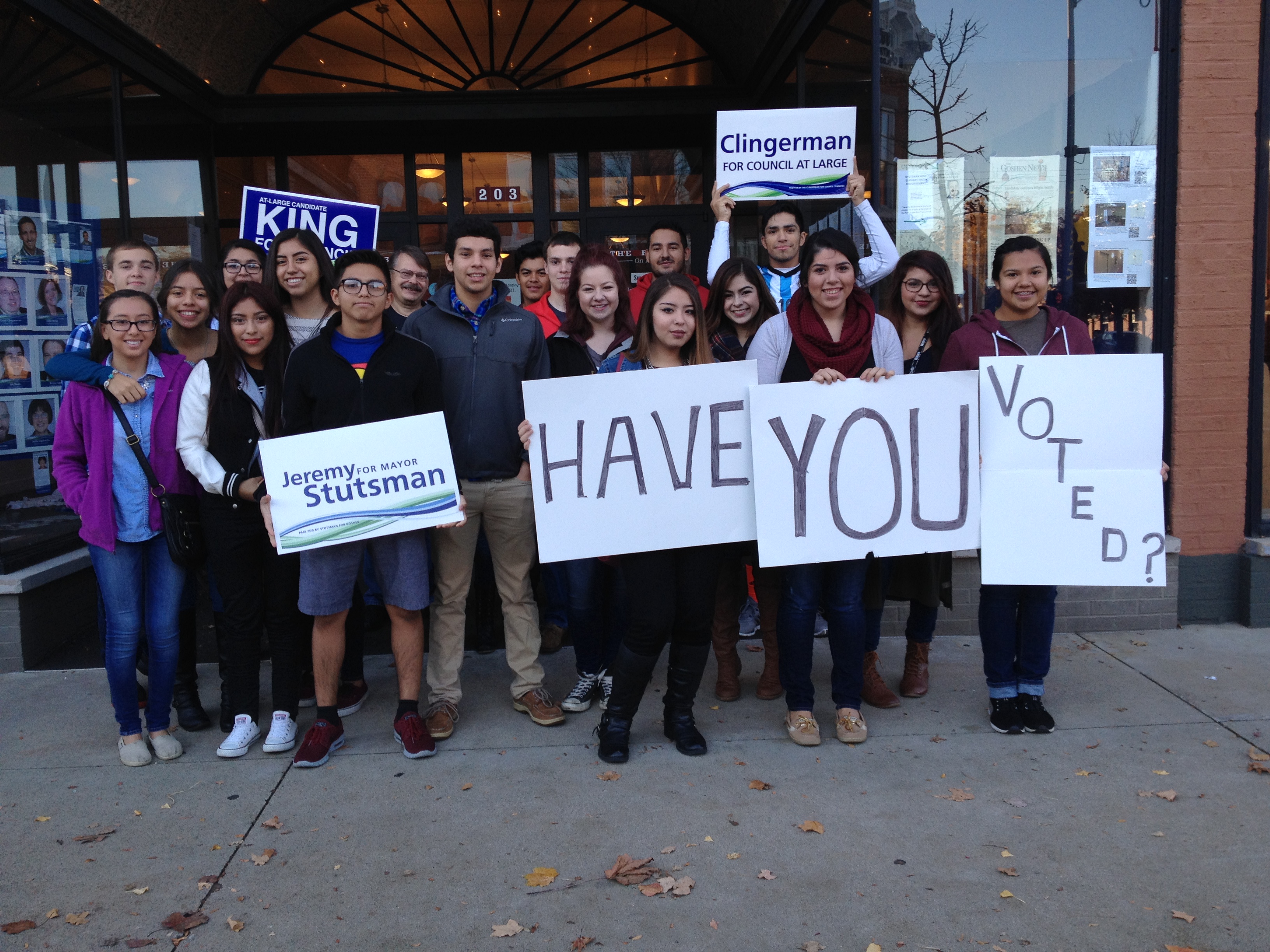 After an unprecedented 19 year reign, Mayor Allan Kauffman will step down to award his office to mayor elect Jeremy Stutsman on January 1, 2015.

According to Goshen’s city website, Kauffman became mayor in April 1, 1997 and his announcement to retire this year spurred one of the largest city election campaigns in almost two decades.

Mary Cripe and Jeremy Stutsman both hustled to catch the eye Goshen voters with large mobile billboards and the oh-so-traditional yard signs.

There is no doubt that these elections have been important and have inspired a good voter turnout. According to the Elkhart Truth, Goshen had a 29 percent voter turnout compared to Elkhart’s 17.6 percent.

Such a good voter turnout could be in part attributed to former mayor Mike Puro. After being politically dormant in Goshen, Puro convocated a Latino group to help in his Get Out to Vote campaign for Stutsman. According to the former mayor, he was not looking for a group that was solely affiliated to Stutsman or the Working for Goshen campaign, but rather a group that encouraged Latinos to vote. A group called Latinos for Goshen registered local Latinos to vote and made voting accessible through English-Spanish interpreters. Furthermore the group of approximately 40 Latino community leaders was able to engage 27 GHS students on Election Day November 3, most of them under voting age.

GHS students reluctantly gave up their school day on that Tuesday to support the Working for Goshen team by visiting voters and asking them to vote. Students also had the chance to eat lunch with the current mayor himself and local attorney Felipe Merino throughout the day. Both leaders guided students and provided them with useful tools. Kauffman had students focus on the North side of town on their door to door visits, while Merino stationed some at the Salvation Army to help any Spanish speaking voters in their voting process.

Yatziri Cortez, a senior who volunteered that day, said that “working as a community I’m seeing a lot of growth in the Latino aspect and seeing more participation in students.” That speaks well of a the campaign, which apparently did well in bringing multiple generations and Latinos closer to the community that day. A former mayor, a Latino group, and GHS students supporting Stutsman? Now that was monumental and perhaps indicative of the future,

Bigger yet, was Kauffman’s endorsement of Stutsman’s campaign since the beginning. But that support was quickly commented upon by Goshen residents and social media users declaring Stutsman as another Kauffman. Good or bad, Stutsman has said, in many of the forums with Cripe and other media, that his plans are to continue Kauffman’s work to increase the quality of life in Goshen.

Quality of life is something both mayoral candidates held on their platforms, but what would GHS say is a better quality of life in Goshen? Sophomore Chris Sanchez comments that “we do need more movie theaters” in town.

Other students took the question more seriously, like senior Rafael Zuniga, who is concerned about teen pregnancy and says a “decrease in teen pregnancy” would be beneficial to the Maple City. Freshman April Pollock thought “equality for all no matter sexuality, gender, and race” was something that needed to be addressed in order to have a better community.

However, there are three key points that qualified him to become Goshen’s mayor.

Stutsman’s second reason for success could have also been his overall experience in serving the community. According to the Working for Goshen website, the elected mayor has been in different city committees and volunteered countless hours for eleven years. This year he is also finishing his second term as an at-large councilman. That position has allowed the mayor elect to work closely with Kauffman and learn the responsibilities of a mayor.

Lastly, Stutsman’s clear vision pulled attention with his specific plans to make Goshen a better place with a high quality of life. One of these plans, is to tackle blight in neighborhoods. He highlights that he will be targeting problem landlords who have multiple properties and are not up to date on code. Neighborhood associations have been trying to tackle these problems themselves, and now Stutsman wants to offer more city support to rid neighborhoods of these poorly managed homes.

Addressing serious issues that concern the city was a good move by Stutsman, whose campaign also involved everything from creative voter outreach to getting students under voting age engaged on Election Day. Stutsman proved to deserve the mayoral seat with 53 percent of Goshen’s votes, but the city has yet to witness what the mayor elect will do come January 1 when his term begins.