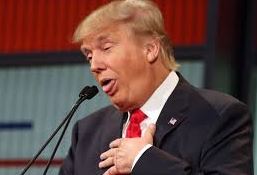 “I’m getting deported if he gets elected next year!” Joey Bernabe, grade 12, slapped his knee and yelled across the room when I mentioned Donald Trump.

The primary elections are rolling up sooner than we think, and who’s hotter than Donald Trump to talk about? Trump has stolen the spotlight in media not only because he’s running for president, but because of the focus of his campaign: immigration.

The controversy on immigration is one thing, but the way Trump expresses himself is another.

“When Mexico sends its people,” Trump says, “they’re not sending their best. They’re sending people that have lots of problems… they’re bringing crime. They’re rapists. And some, I assume, are good people.”

And this is what has gotten not only the public riled up, but our own GHS students too.

“It’s comical to me how rude and blunt he can be to people,” Mitchell Walters, grade 11, claims. “If he ends up president, I don’t think he’ll be able to do 90% the stuff he says concerning immigration.”

So what exactly is Trump trying to do regarding immigration?

One of his biggest proposals is to deport all 11 million illegal immigrants in the United States.

Jacob Biller, 11, doesn’t seem to believe Trump. “I don’t think it’s possible because he doesn’t know every illegal immigrant. Trump has yet to substantially backup how he is going to find all these illegal immigrants and deport them back.”

Michael Wohlford, a GHS social studies teacher, says, “He’s not very specific with most of his proposals. He speaks in general terms most of the time, which helps with a lot of voters because they latch on to his emotion. I think in the long run, lack of specifics could hurt; when you get closer to the election, people want to know a concrete plan.” Biller doesn’t seem to agree with this either: “I don’t think we should have a wall. America is a melting pot of everybody: different cultures, ethnicities, races, or whatever. We should be welcoming people to come to our country.” He shakes his head. “As far as affording it, I don’t think we can afford it. Trump’s proposal of ‘I will make Mexico pay for it,’ is just Donald Trump’s arrogant mouth running.”

Part of Section One of the Fourteenth Amendment states, “All persons born or naturalized in the United States, and subject to the jurisdiction thereof, are citizens of the United States and of the state wherein they reside.”

An anonymous freshman says, “I doubt Trump can get rid of the Fourteenth Amendment. It’s a proposal that has to go through Congress in a long process. It just doesn’t seem moral; these weren’t the principles our Founding Fathers built this country upon.”

For Salvador Garcia, a Hispanic junior, Trump’s immigration proposals wouldn’t be moral at all. “You have people coming in [to the United States] for various reasons, some reasons being just wanting a better future. Not every country is as developed as the United States, so your best luck would be to come here and find opportunities. Being from a Hispanic family, that’s what my parents wanted for me; they wanted me to have a better life than they did.”

These Hispanic workers, just like Salvador Garcia, are looking for better opportunities. Most Hispanics will even go to great lengths in order to obtain jobs; Hispanics who don’t have work permits will buy false documentation with a false social security number in order to work.

In reality, immigration can actually help boost the economy. According to www.whitehouse.gov:

Despite all of Trump’s outrageous proposals, he is rapidly gaining popularity. Some people call Trump honest, others label him rude and racist. At GHS, most people disagree with Trump and seem to accept immigrants. Only one student out the ten interviewed agrees with Trump’s proposals.

Will Donald Trump be the next leader of the United States? Take a stand, America.