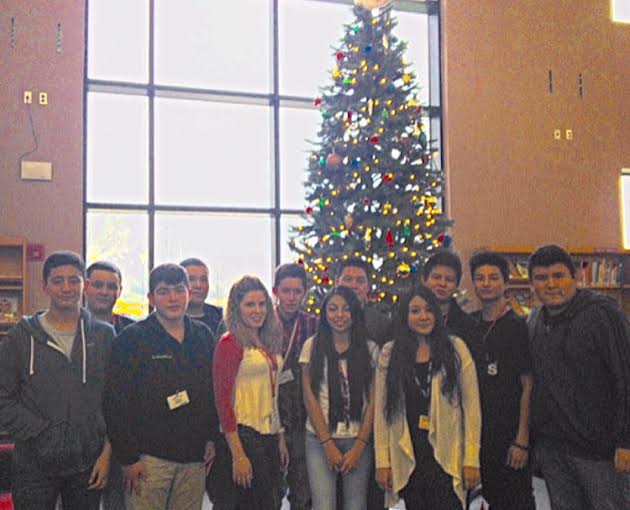 Editor’s Note: This article is the extended version of the article seen in the December 17 print edition.

But if you’re Latino, it’s more like campanas navideñas, villancicos, y el Niño Dios. People from all over Spanish speaking Latin America share many of the same traditions when it comes to celebrating Christmas, well really they’re traditions shared with anyone who celebrates Christmas. What comes to distinguish these tradiciones, are the variations and unique twists given to the 2000 year old celebration.

GHS is truly gifted when it comes to being the home of students with so many different backgrounds. It’s important to clarify that although most Latino students are Mexican, many come from the Caribbean, Central America, and South America.With that in mind,traditions may vary slightly or be completely different from region to region.

In Mexico, Christmas is a very religious celebration, one that begins well before December 25. Festivities take off December 16 with the beloved posadas. A posada, the reenactment of Joseph and Mary searching for lodging, goes on until Christmas Eve. For those nine days neighbors gather in a neighbor’s home. Part of the group stays outside of the home to represent the couple and exchange a conversation in song with the homeowners. The conversation begins with a plea that is readily rejected but ends in a warm welcome into the home.

It is customary for homeowners, if they are Catholic, to host and pray a rosary with their neighbors. Posadas most often culminate with either the host offering refreshments, bolos (goodie bags), or a piñata. Traditionally bolos are filled with toasted peanuts, an orange, a piece of sugar cane, chocolate, and other typical Mexican candies. Piñatas were also traditionally stuffed with fruit and sugar cane and were originally invented for posadas.

The vibrant Latin American holiday fiestas we envision still have a religious focus. All revolves around the birth of El Niño Dios or baby Jesus. The most traditional fiestas begin with a special Christmas Eve mass which is soon followed with the last posada either at church or at someone’s house. The day of great festivity continues with family, friends, and neighbors gathering to await the birth of the El Niño Dios.

After the posada usually a great feast is served.

If you’re Mexican, well you know the drill. The menu usually consists of some savory tamales with some champurrado, a hot pasty drink flavored with with chocolate, or a nice hot atole, a type of corn drink. Other times pozole is served, this hot soup is used to stay warm during the Christmas Eve celebration.

Hernández explained how people go to a friend’s house and “bring a band and sing at the house, cantan enfrente de la casa en la madrugada.” These are the so called parrandas, or parties that friends put together usually at dawn of Christmas day.

In Honduras food and music happen a little differently. According to sophomore Jason Barahona, a Honduran native, nacatamales and punta are quite typical in his family’s Christmas celebrations. Nacatamales are the traditional Central American version of the tamal we all know, but instead it is enveloped with banana leaves rather than corn husks. Punta is genre of music native to Central America and incredibly popular in Honduras.

Traditionally, Christmas Eve is celebrated in Honduras like in much of Latin America, beginning with a visit to the local church for a special Christmas Eve service. Nativity scenes, also popular throughout latinoamérica, are set up with great detail both in churches as well as in homes and public locations. Figurines are usually placed under the Christmas tree or on a table if it’s very elaborate.

The Dominican Republic along with Colombia share many of the same flavors when it comes to delicious Christmas meals.

According to sophomore Juan Astaiza Bravo from Colombia, Christmas is a family celebration lighted up with flamboyant salsa music. A typical Christmas eve meal may consist of a sancocho, a beef and chicken stew. The dish is flavored with plantain, carrots, corn cobs, and yucca.

Juan Núñez Mejía from la República Dominicana says that el sancocho is also quite typical of his country. El sancocho takes a Dominican twist by adding pork chops and edible tropical roots. In Mejía’s country rice with chicken, arroz con pollo, is also popular, but the delicious habichuelas con dulce are a must. Habichuelas con dulce, is a sweet dessert made from blended red beans and sweetened with condensed milk. Flat round pieces of yucca bread are also added.

Although the food and language may be different, there are many similarities in celebrating a Latino Christmas and a good old American Christmas. The old tradition of putting up a pine tree adorned with lights and ornaments has also become a tradition widely adopted in Latin American countries and households. Holiday traditions are now a vibrant mix. Our world and our similarities as people converges becoming quite evident in villancicos, Christmas carols, such as Holy Night and Noche de Paz, which are the same. Feliz Navidad, has united English speaking Americans with Spanish speaking people across the globe.