Home / Arts and Entertainment / Movies / Will Star Wars VII Live Up to the Hype? 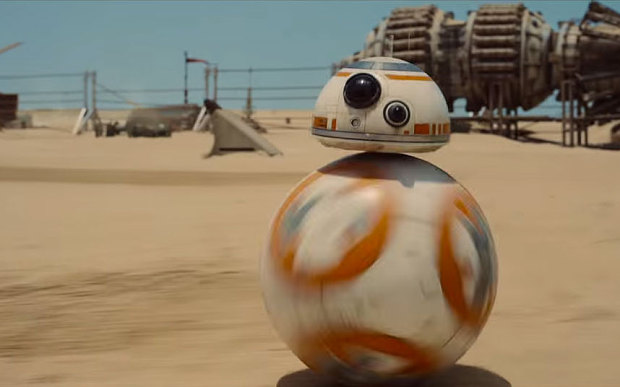 Editor’s Note: This article is the extended version of the article seen in the December 17 print edition.

It’s not a moon, or a space station, but it’s coming to a theater near you on December 18th.

The newest movie in the series in ten years, Star Wars VII takes place thirty years after the sixth film where (spoiler alert) Han Solo and the rebellion face the mysterious new threat Kylo Ren and his stormtrooper army. BB8, a new droid featured in the trailer for Star Wars VII (picture retrieved from The Daily Telegraph).

The movie is predicted to be a booming success for J.J.Abrams and Disney’s wallets. The New York Times reports that there is a predicted $6.5 million in ticket sales for just IMAX theatres alone, also passing the previous record for one-day advance sales of $1 million.

“I’m excited, I have no idea what they’re doing.” George Lucas said referring to Abrams and his crew in a New York Times interview.

Lucas told Cinema Blend earlier this year about his idea pitches for the new episode, saying “The ones that I sold to Disney, they came up to the decision that they didn’t really want to do those.” He then added, “So they made up their own. So it’s not the ones that I originally wrote.”

Abrams, who was only 11 when the original Star Wars came out in 1977, was reluctant to take the job at first. Entertainment Weekly had an interview with the Lucasfilm president Kathleen Kennedy, who gave him one question.

“In the context of talking about story and laying out what we were thinking, I said one thing to him, Who is Luke Skywalker?” she remarked.

With a long time fan of Star Wars behind the new movie, what’s not to love? He can finally bring us the movies we’ve wanted after all these years.

Or can he? Taking on a project as big as Star Wars can be pressuring, and some of that pressure has been put onto Abrams already.

Mashable.com uncovered that #BoycottStarWarsVII, created by a few trolls to make people angry, had caused many arguments and angry rants over the original posts in the hashtag, which referred to “J.J. Abrams’ political correctness” as “a codeword for anti-white”. Kylo Ren, the new antagonist of the movie, readying his lightsaber for battle (picture retrieved from dailymail.co.uk).

Fans were also not happy when, in the original trailer for the new movie, a crossguard lightsaber was revealed for the villain. While the internet blows up about the trivial hilts and how they should be able to simply be sliced off, Stephen Colbert, former host of the Colbert Report, has a different outlook.

“People think it’s actually three different plasma streams, but it’s all one,” Colbert said. “The long beam right here comes out and the two smaller beams at the bottom, they’re still attached to it. They don’t start where the little metal hilt ends, OK? They’re attached to the other beam inside. The metal hilts are just casings around the little beams to protect your hand. Even if someone slices through the metal, they’re going to hit the beam right there. Any padawan knows that.”

We know what the internet, the theaters, and other celebrities think of the movie. But what about students here at GHS?

Sophomore Lucas Roth said “Yes, because I like new movies. I just don’t like Star Wars.” He goes on to say it could be improved with “Better sounds. I don’t like the old laser noises.”

“Yeah, more than the last three.” Principal Dr. Younghans commented on if he anticipated the new movie. “I think it will be more like the stories I remembered as a kid.”

Freshman Jacob Goley joined the club as well. “Yeah, I’m pretty excited. It looks exciting, there are a lot of new changes to it.”

When it comes to changes, this movie is shaping up to be very different from the rest. A new villain, a new droid, and new protagonists, all fitting for a new director.