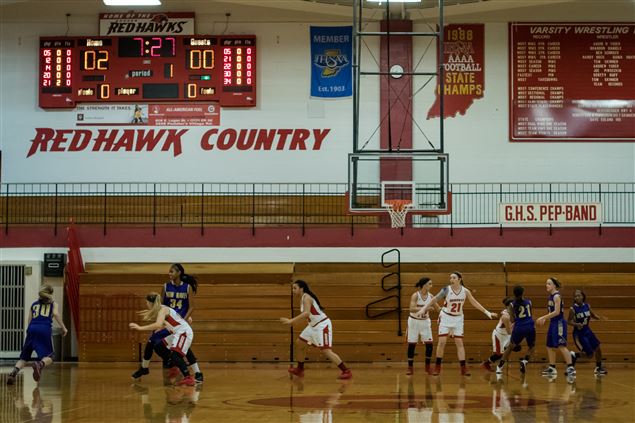 On January 1, 2016 the RedHawk became the official mascot of GHS. The new mascot was revealed in November 2015, after the mascot change was announced in July 2015.

While students were on vacation in late December and early January, the gym was being remodel so there would be no Redskin logos remaining. Other than the gym there will be more athletics changes such as new uniforms, new signs in the gym and fields, in the spring or summer. These changes will cost $38,000 or even more depends on what they want to add for the new mascot, according to WNDU News. The RedHawk mascot made a debut on January 2 during the girls basketball game when they were warming up with shirts that said “RedHawk Rising.” Other winter athletes were provided with the same shirts, and have been encouraged to wear them around Goshen, publicizing the mascot change.

“I feel it means the ‘start of a new era’ of Goshen Schools with the RedHawk as the mascot,” says Athletic Director Larry Kissinger. “We will overcome the adversity of the mascot change and all other distractions to represent the Goshen Community with pride!”

A pep rally was held at the main gym on January 4 when students came back from break, and a short program was held at the middle school. Senior Elayne Davidson in the Redskin costume took one more lap around the GHS main gym. It was a last goodbye to the Redskin mascot, leaving the community with mixed feelings.

Now we have a new mascot, people are wondering what will be done with the past Redskin decor. Questions have been asked about whether the school will sell the decor or keep it for storage.

“The name will be recognized on February 20, there will be a open house,” Dr. Barry Younghans says. “It will be a little museum to display the mascot.” The open house, which will be open to the public, will be February 20 at 4:30 in GHS cafeteria. The “little museum” will represent the 90 year tradition of the Redskin mascot.